So...  our accordion lessons are going well... actually quite well... but our accordions are not.  The accordion that I use (which my dad bought it for me in New Ulm, MN 40 years ago) has been sticking.  One of the clever little black buttons on the bass side was sticking in the 'on' position creating a monstrous drone effect much like a bagpipe.  Gross.

And Jan's accordion made a crunching sound and refused to close its bellows.

Our accordions were a mess...

My accordion was easily fixed by this accordion guru in Walker, Iowa.  Allen runs the Simanek Accordion Repair Shop in his front porch.  He's extremely knowledgeable and skilled at playing the Czech button accordion.  He has many, many accordions (and his wife does not even mind!) 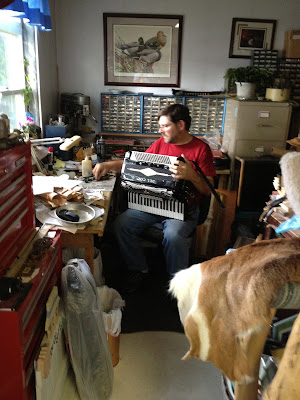 I'm sure his brain can fix anything!  His shop was full of parts and pieces and oils and tools.  He was able to fix my accordion in about 10 seconds with a strategic shot of silicon.  Presto!  No more sticking! 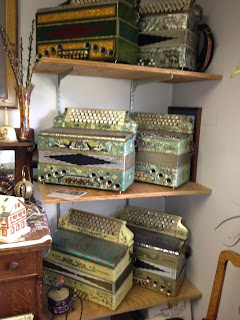 Each week, Jan's accordion made more crunching sounds, but not all the time.  She could play it and then it would crunch.  It rattled.  But she could play it.  It was odd.

It was broken, but it still played. 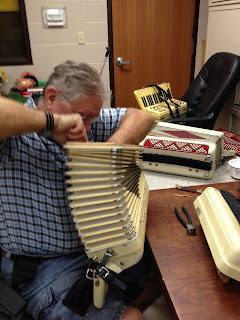 One week, after so much crunching we couldn't ignore it any more, Keith (our saintly teacher) pried off the side to take a peek at the innards of Jan's beautiful accordion.

Now we knew what was rattling and why the bellows would not close and what was causing the crunching. 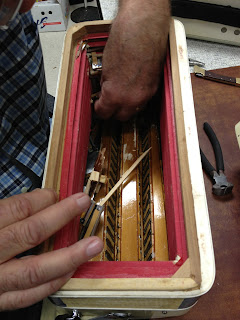 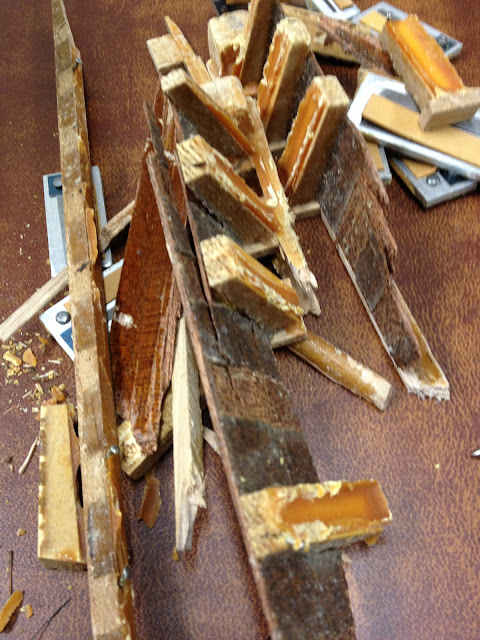 There was nothing left to do but put the side back on and put it in its case.  Surely it was destroyed.  But Jan strapped it back on just to see what would happen.... and sure enough, her accordion produced the most delightful sound!  Jan quickly modulated into an appropriate polka - a beautiful accordion song!

We laughed!  We high-fived!  We tee-hee'd and did the accordion jig!  It was broken but it still played!

I think that's how people are, too.


At times, we are all busted and broken.  Things happen to us. We make poor decisions.  Everyone has something in their life that is broken or disappointing.  We fail.  That's how life is.

But even when our lives are broken, we can still be used by our heavenly Father.  He might repair us, or sometimes, He might not.  A simple shot of silicon might be what's needed, or a complete overhaul.

And just like Jan's busted-up-on-the-inside-accordion, we can be amazingly played and produce a beautiful song for the Lord. 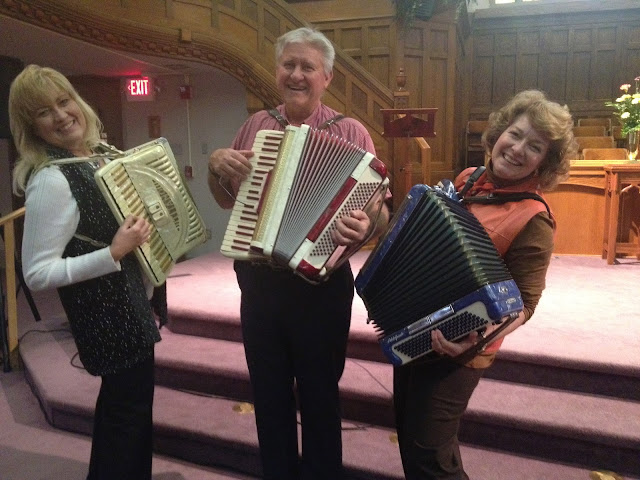 Posted by Janet Collison at 11:54 AM No comments:

Restoration... a Big One!

So...  my dear husband John has a new project.  Frankly, it's not anything I can understand.  Why would anyone want to buy (yes... BUY) this old battered rejected unpainted frame of a car with it's black disgusting smelly engine that has not turned for 33 years. 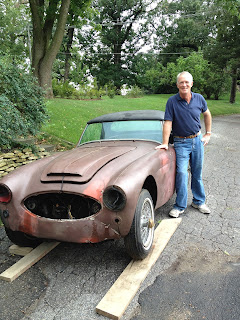 John actually desired a restoration project like this!  He has been watching Ebay and craig's list and any other internet site that advertises junk yard has-beens similar to this....  He shopped for THIS!

This searching out of rusty relics delights him; his fascination with it fascinates me.

John's lovely dental assistant found this Austin Healey 100-6.  I was along when he first set eyes on it.  He couldn't sleep he was so excited to get started on this gem...

I asked John how many jobs there are to do before the car is fully restored. 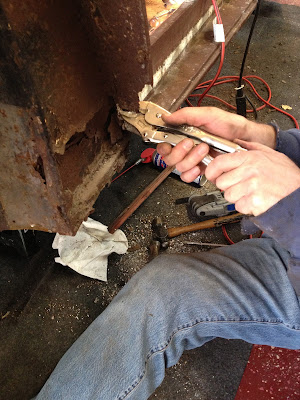 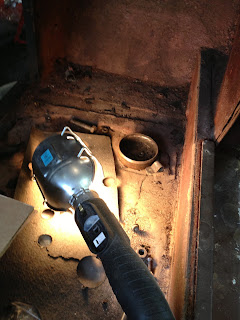 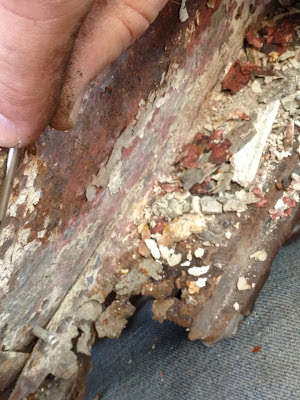 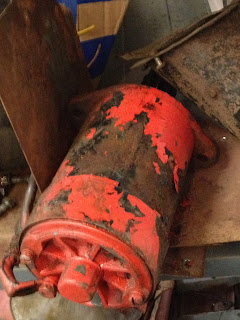 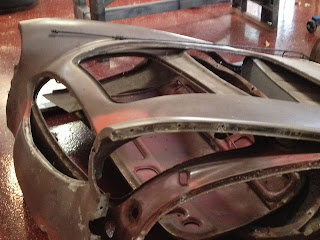 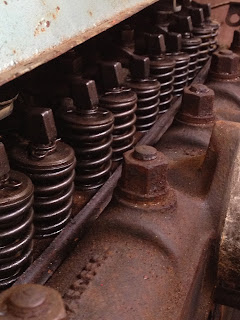 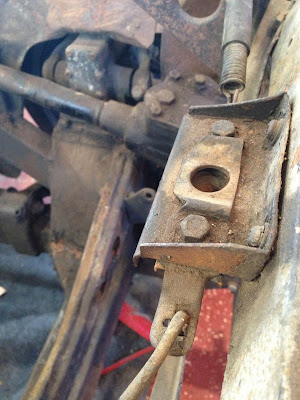 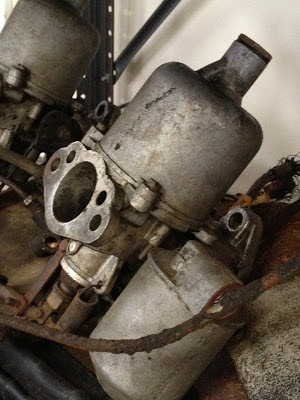 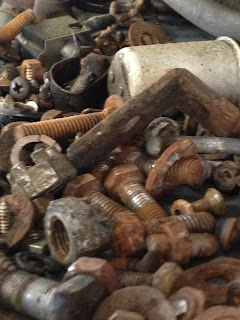 More like 500.  There are at least 500 jobs to do before this project is done and running down the street doing its thing.  "Some jobs are simple and some are difficult...  If I get some of the big stuff fixed, it'll at least run...." 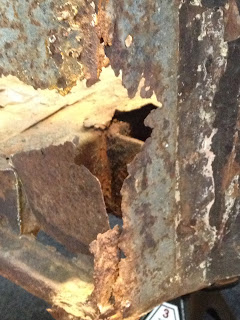 So... each day I watch John work on jobs.  He has spent most of his free time completely dismantling the rusted frame.  With great effort, every piece of crusty stuff, every mangled wire, and every stubborn rusted-on bolt is now off the frame and displayed on the garage floor.  Some pieces are so cruddy and eaten away they crumble.

The engine is out and every drop of its smelly gruel-ish oil is also displayed on the garage floor.

John is absolutely delighted.  He knows he can replace and fix and clean and weld and paint and completely restore all of it.  Turn up the music!  Get to work!  To quote Dr. Seuss, "Oh the places we'll go, the things we will see..."  He is not dismayed by the multitude of jobs, he's delighted! 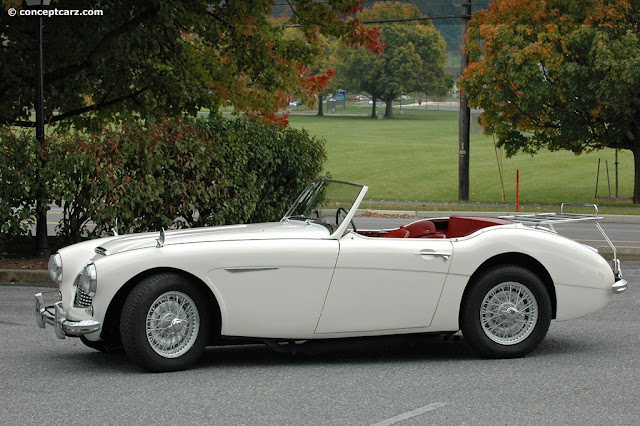 The other day, a man walking down the street knocking on doors making political calls wandered over to John's garage and struck up a conversation.


He asked why John was working on a manure spreader! 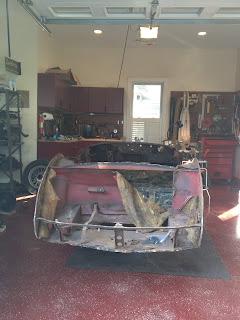 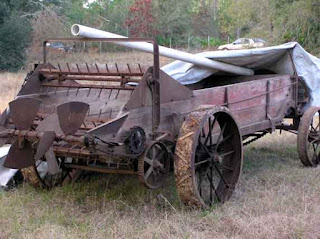 I'd have to agree... today when I look at the back of John's special Austin Healey it could be mistaken for a manure spreader.


I grew up on a farm and I'm familiar with manure and spreaders.  Some poor soul scoops the manure from the hog pen into the spreader.  A tractor pulls the spreader into a field and activates the chain-operated pushers which of course, push the manure to the back end of the spreader toward the flinger.  The flinger whirls around and spews the manure into the field.

It's not rocket science.  (See what you've learned from reading this!!)

Sometimes...  yes, sometimes...  There are days when my life resembles a run down Austin Healey that could be mistaken for a manure spreader.

And God, my almighty Father says no;  He calls me His child.  He delights to take me on as a special restoration project because he knows what I can become.

He has many jobs to do to make me into what He wants me to be.  He has junk to remove and days to restore and attitudes to fix but He knows what to do when.  He knows which fixes will be simple and which will be difficult.  He knows how to get me up and running like I should.

And your life is not a run down jalopy that could be mistaken for a manure spreader.  You have been carefully chosen.  You are a gem.  You are being fixed and restored day by day by day.... You are a delightful project, well worth our heavenly Father's attention and love and grace.  It's His gift to us, this grace that loves and cares and redeems and puts us back together.  He's delighted to restore your life.

For we are God's workmanship, created in Christ Jesus to do good works, which God prepared in advance for us to do.  (Ephesians 2:10)

Be encouraged.  Be bold.  Be sure of God's unlimited love and lavish delight in you.  He's willing and able to work out the smelly parts of your life.  He's delighted to restore and redo any area of your life that is crumbling.  He has a plan.  He loves... loves... loves... to change you for the better...   He knows what He created you to be...