So... We've all read odd stories about odd people and I'm sure you have heard the saying, "It had to be real... nobody could make this stuff up!"  But this bizarro story from Scripture really caught my attention with its strange but true Samson character: - he catches 300 foxes and ties them together by their tails, fastens a torch to the tails, lights the torches and sets fields and vineyards on fire

- he breaks ropes when he gets tied up

- he pushes down an entire temple by rocking the pillars and kills most of mankind in the Philistine city of Gaza
(see pic and hear the screams.... more trauma....)

Do you remember the story of Samson from your old Sunday School days?  I can still see in my mind the Sunday School pamphlet with this horribly gruesome picture of Samson, bloodied and nude, chained to pillars with his eyes gouged out, rocking the temple pillars and people screaming and running for their lives.

I think that explains a lot... At age 5, I was afraid of getting my eyes gouged out...

(And look at that picture!  There's a harp at his feet!  A perfectly good harp will be trampled and destroyed!) 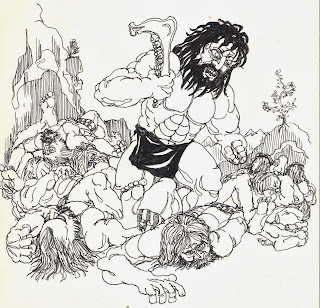 If you'd like a refresher on this story, you can read the story, complete with thought provoking comments, here.  Or you can go to your Bible and read Judges 13 - 16.


A couple of points strike me with this insane story:

1.  He's a major buffoon and yet God continues to use him.  This monster of a man has some faults but he had a job to do.  He was to begin the deliverance of Israel from the Philistines.  He was 'set apart' to do this which brings me to the second point

- Touch a dead body (I would have no problem following this rule...)

To accomplish all his above-stated feats of strength, Scripture says that "the Spirit of the Lord came upon him in power."  Samson, the Nazirite, was 'set-apart' for God and obviously looked different with his long hair. As long as he had this hair-do (which was the symbol of his closeness to God) the Spirit of the Lord was on him and he could do the powerful feats of strength.

Delilah, Samson's favorite prostitute, hounded him into telling her the source of his strength.  She shaved off his braids in the middle of the night and he was no longer strong.  He really blew it!

But his hair grew back as did his strength and he proceeded to kill the city by pushing down the temple with his muscles.

After reading this story:

- I'm SO glad I'm not called to do stuff like this - my jobs for God are easy compared to this! 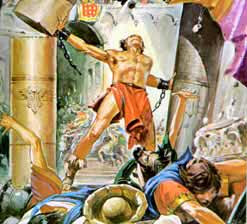 We are all 'set-apart' for God.

We all have jobs to do, places to go, and people to meet for God.  As believers, our job is to show the world we are different because we have God in our lives. Our thoughts are different. Our goals are different. We have the Spirit of the Lord in our lives which gives us strength to do things we couldn't normally do.

We all get second chances.

When Samson's hair grew back, we was strong again and he got another chance to kill all the Philistines. (Again, I'm SO glad I didn't live back then!)  While his hair was growing back, he was stuck in a cellar turning the wheel like an ox to grind grain.  He had time to think about his mistakes and rededicate his life to God. 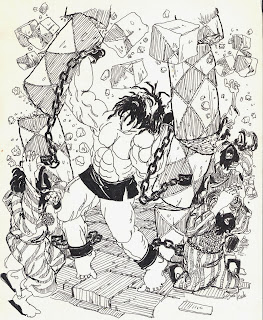 I'm SO glad I get second chances, and third... and fourth... and more...  I blow it.  I fail. I receive mercy and forgiveness.  I get going again on the right path with God.

God has a plan.

God has a job for you to do.

God will provide the strength to do it. 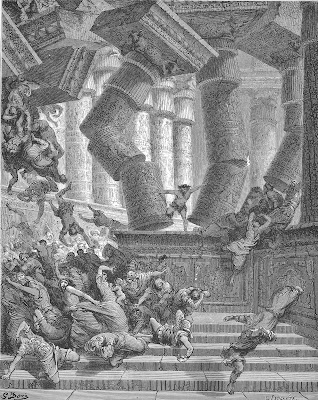 What feats of strength have you been called to do for God?