Sat. July 20, 2019: The Jubilee Accordion Trio again played at the Marshalltown Art Fair. It was
especially jubilant because last year's event (2018) was cancelled due to a tornado. 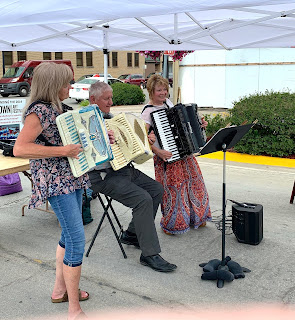 Monday, April 22, 2019: The Jubilee Accordion Trio played for a PEO Brunch affair. So many interesting questions were answered. It was really fun!

Monday, Dec. 17, 2018:  The Jubilee Accordion Trio again played at the doorway of
Marshalltown's Hyvee to raise funds for Salvation Army. The shoppers were doing the polka down the aisles. This is always really fun.

Sunday, Oct. 21, 2018: The Jubilee Accordion Trio played at the Presbyterian church in Marshalltown. We opened their Hymn Sing event with a couple of songs.... Bring on a polka! 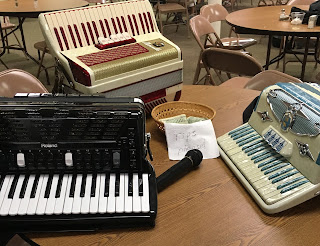 The Jubilee Accordion Trio is available to play for events... but you really need to like accordion music. Actually, it is a fun group to play in. We have a lot of fun and don't take anything too seriously;  always a good idea...
The various gigs we play for are all listed on my event page.

Sept. 10, 2017:  The Jubilee Accordion Trio played at First United Methodist's annual packaging
event.  The accordion does such a great job of adding mirth to this event.

Aug. 23, 2017:  The Jubilee Accordion Trio played at the Garwin park for the town's weekly music
event.  We worked up some new songs for this gig including "Hernando's Hideaway."

Aug. 28, 2016: The Jubilee Accordion Trio played at First United Methodist Church's annual Packaging Day. While the accordions were 'resting,' a pie was thrown in the face of our very gracious youth leader. What a riot! And yes, that is a tip basket and we did raise $ for the event. We did not get paid to stop playing this year!!

Sept. 20, 2015:  The Accordion Trio played during the annual packaging event at First United Methodist Church.  A good time was had by all - people like those polkas! 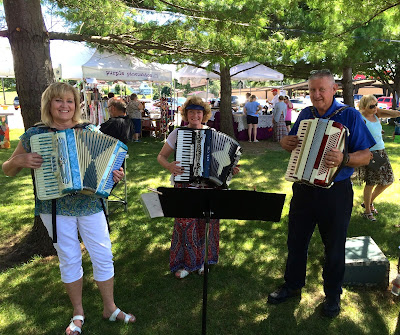 July 18, 2015:  The Trio played at the Lynn Creek Art Fair here in Marshalltown.  It was warm outside and our music was... well… cookin'!


March 15, 2015:  The Accordion Trio played at First United Methodist Church both before and after the 10:00 service.  Bill Wilson, drums and Bruce Randall, bass also played.  The combo made us sound good!

December 22, 2014:  The Accordion Trio played at HyVee and rang the Salvation Army bell.  We drew a crowd!  We could see people dancing down the aisles.  There was a friendly smile is every aisle... 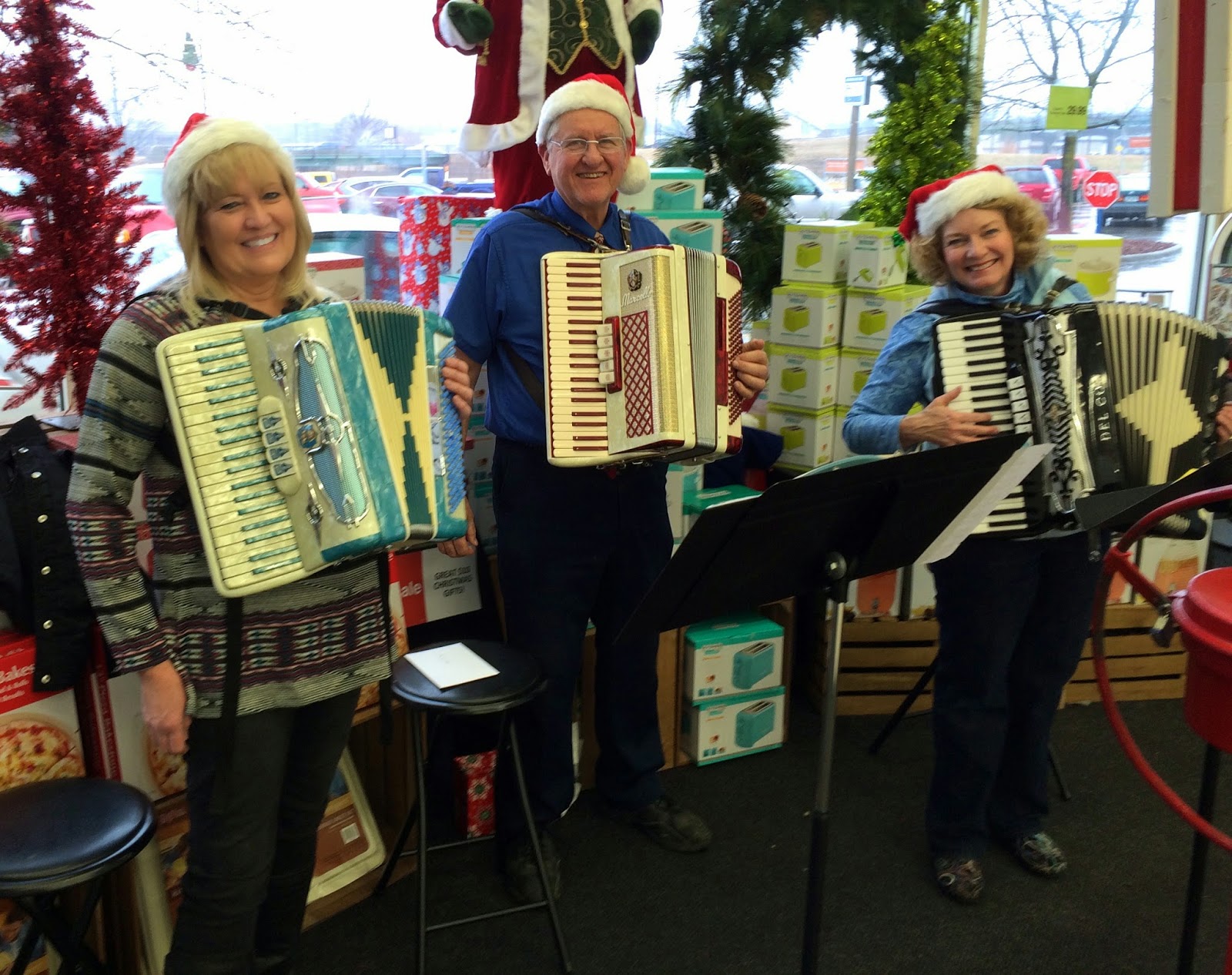 Oct. 16, 2014:  The Accordion Trio played at a jam here in Marshalltown.  What a hoot!  These folks have been meeting for years, playing together and having a great time.  When Jan and I walked in, we created quite a stir, to say the least.  Keith, lug teacher, pulled us through - we had a great time.  Jan said, "These people know how to have fun!"

As you can see from the lower picture, there were about 10 guys and a couple of women playing instruments - mostly guitars.  I loved the long beards... 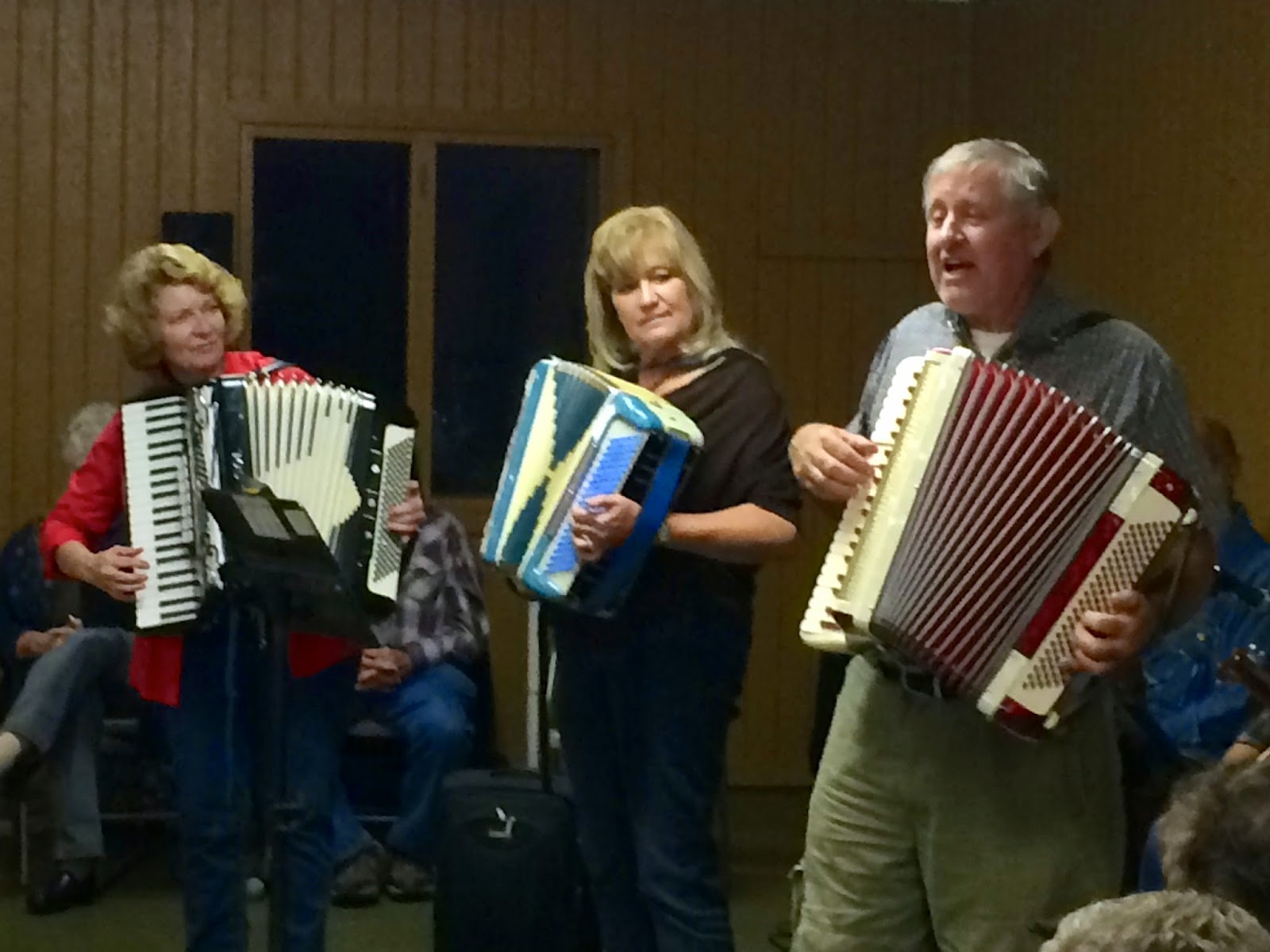 April 25, 1:30:  The Accordion Trio will play at Good Samaritan Nursing Home.  Janet's mother lives there.  She will think this program is a dream come true!  The public is invited.

March 26, 2014:  The Accordion Trio played a program at the Iowa River Church of the Brethren.  The ladies' group was enjoying a salad luncheon.  We had them singing and clapping and having a
grand time.  Our light-hearted program was enjoyed by all.

Dec. 21, 2013:  I played accordion at my Mother's Christmas Party - she thought it was
a hoot.  I had some help from my 2 grand-nieces!  They boldly sang while I played and
were absolutely adorable! To view this auspicious event, go to the family's blog!  I loved
seeing Mom smile.


Dec. 19, 2013:  The Accordion Trio strikes again!  We played and rang the bell for
the Salvation Army bucket collections at Hy-vee in Marshalltown.

Keith, Jan and I played accordion at the annual German Supper, Nov. 3, 2013,  here in Marshalltown.  We yucked it up!  What fun!

Jan and I start up accordion lessons on Wednesday, August 22, 2013... Have not touched the accordion all summer.  It's been at the theater and was used in "Annie" as a prop.  YIKES!  I'd better get going on this!


We took a cruise on the Island Princess in March and..... drumroll...... there was a guy on the boat who played accordion!  He was fantastic!  By the end of the cruise, he knew I was hanging around him (stalking, actually) to hear him play...  His trio was from the Ukraine and I don't think he could speak English... 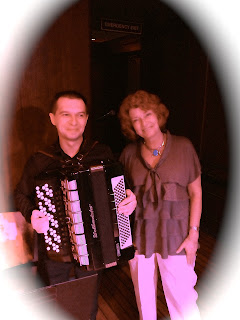 Oh my!!!!  Saint Keith, Jan Randall and I played a gig at a Tuesday Musical meeting on Feb. 12, 2013!
The program was entitled "Teaching Old Dogs new Tricks."  Got the polka music going...  Our goal was to make the ladies laugh with us...  Mission accomplished! 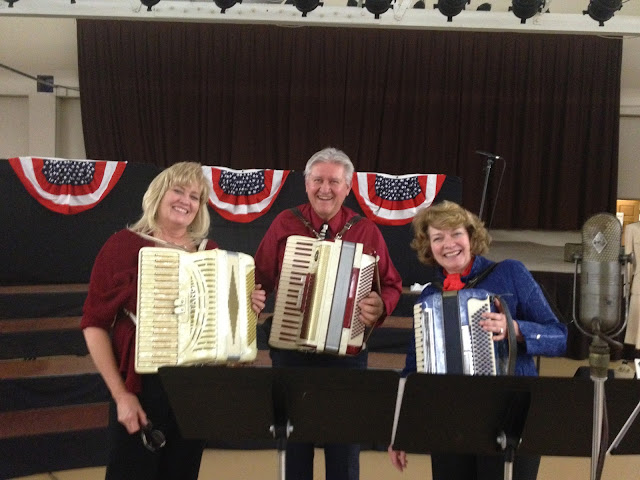 Big day today!!!  Jan Randall (left) and our teacher Keith Lambertsen (center) and I actually played a gig at Marshalltown's Impala Ballroom!  The local Sweet Adelines' singing group presented a Veteran's Day Program and we.... yes, we.... were the finale!

Both Jan and I were quite concerned that we were to be featured as the finale.  That sounds important and we do not feel our skills are up for being an important part of a program.

But by a bit of poor communication, the finale problem was solved!

There was a lovely announcer at this program and he did not have the information about us playing.... So he thought the whole deal was over!  He gave all the thank your and told everyone to drive home safely and shut off his microphone as we were setting up our stands and spreading our 11 pages of music.  It looked like we were going to play for a week!

So Keith (Saint Keith) started announcing us through the mic and away we started!

It was perfect!  People were donning coats and leaving.... talking... shuffling.... chairs squeaking... all while we were playing...  Everyone heard us (3 accordions!!!!) but no one was really paying attention!

We flew through our military tunes!  It was grand!  We had fun!  Mission accomplished!

Thank you, Mr Announcer, for shutting down the show right before we played!

So…. Do you ever think, ” I really should do that” and then don’t?  Inspired by harpist Deborah Henson-Conant who is constantly mastering something new on the computer, creating a new sound on her wild electric harp or connecting with someone she finds interesting, I resolved to dust off the old used accordion which has been sitting in the back of the closet for the past 32 years and learn how to really play it.  (On a  whim, my dad bought it for me about 40 years ago and my accomplishments are few.) And that’s exactly what I did… I dusted off my beautiful black and silver accordion and then… abandoned it under the piano.

3 months later, 2 good buddies up at church were discussing accordions.  Ruth had her mother’s accordion and Jan said she has always (really?) wanted to learn how to play one… The inevitable happened and Jan became acquainted with Ruth’s mother’s accordion in one quick drop-off.  It took me about 6 minutes to show Jan everything I knew and amid much hysterical laughter, we decided we needed lessons.

Mr. Accordion (Keith) works just up the street from my home and actually agreed to take us on as students.   Saint Keith really is a wonderfully patient instructor who works at the Salvation Army… and that’s exactly what our accordion playing needs – salvation!  We are learning how to push the buttons and our left arm muscles now bulge from bellowing.  Once in a while, we even play a song that is recognizable… all of this amid much hysterical laughter…
A joke:  Saint Keith told us to never never leave our car unlocked when we have our accordion in it… Absolutely do not leave the car unlocked with the accordion in plain view…. because when you get back… there will be 2!!!!!
He also told us of a gig he played at a local nursing home…. He played 1 song and one of the residents loudly shouted, “OK, that’s good…. you can go home now!”  Keep in mind, he is truly skilled on the accordion.  He can whip out a polka at top speed and grin at the same time!
I cannot…
But I’m trying….
It’s given me something new to try… something new to fill my time… a new goal…  The timing is right, the lessons are working and the dust is flying off this old black and silver accordion…  I also get a good dose of ‘laughter therapy’ each week at lesson time.  I can’t help but wonder what will happen with this new venture.  Will this be a new chapter in ministry for Jan and me?  Yikes…  What happens when someone enters a room strapped to an accordion and threatens to harass all the eardrums present?
John 10:10 says “I (Jesus) came that they (we) may have life, and have it to the full.” (NIV)  This venture with mastering the accordion has given me something new to work on… My time is full and rich and loud, very loud.  My left arm is stronger and hopefully my mind is, too.  And I think, and Jan would agree, that amid much hysterical laughter, life is getting fuller and richer and merrier; John 10:10 is happening!