So…I'm conducting our community's production of Handel's Messiah 2014!  I still can't believe it! 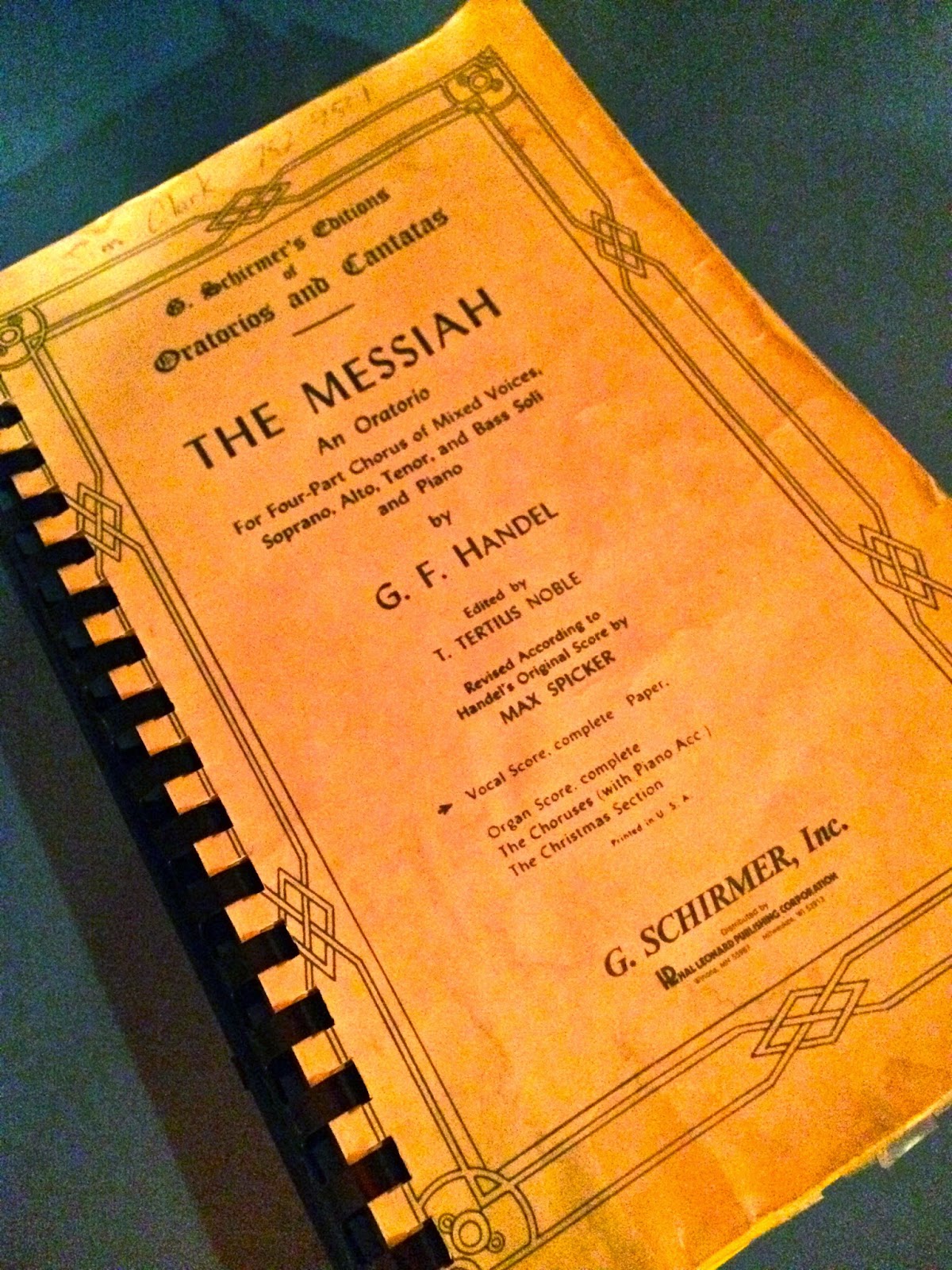 This Messiah thing has been (insert tune) "a long… and.. winding... road" and I'm gonna take a few minutes to jot it down.  I hope you are encouraged by this "long and winding road" story;  our stories encourage and should be heard, so here goes mine.  I promise I'll make a point.

"Let's start at the very beginning…"  (peppy little tune from "The Sound of Music.")

A good friend of my mom's (Peggy) keeps me posted on my hometown's news and recently informed me that one of my classmate's father (Wayne) died.  He was a trustee in the small country church I grew up in (a trustee was a bigwig.)  The news of his death got me thinking about Wayne and the time he came to my house and how it impacted my life:

1974:  I was 16 years old when Wayne and Art called and asked if I was home and could they come over and talk to me.  This was before email and cell phones, in fact, it was almost before computers and cool-whip.  They came and actually sat down on the couch (!) and I'll never forget what they asked:  they wanted me to pull together a choir of adults at the church to sing for the big anniversary shindig coming up in the summer.  Our church had had a choir (until that director died) and they could think of no one else but me, at age 16, who might  do this.  I was floored….  stunned, even….  but of course I said yes.  Oh, I was scared to death! I remember my high school vocal teacher helped me pick out music from the high school files and loaned me the risers and robes.  All 22 of us (22% of the church membership) rehearsed down in fellowship hall and sang with all our might in 4-part harmony.  It was a grand occasion and successful - at least in my mind it was.   I situated Art and Wayne up on the top row of the risers (you ask why I put creaky old Art on the top riser???)  We were the Mormon Tabernacle Choir right there in Lotts Creek, Iowa.  All 22 of us farmers!

We went on to present a couple of successful cantatas with the 22 at Christmas time until I left for college.  I can remember pulling out my coronet and playing while the choir (donned in the borrowed robes from the HS) processed in and out at the beginning and end of the cantata.  I was the only person who played an instrument in the whole church.  Frankly, I was a terrible coronet player but it had to be done...

1978:  When I was 20, the pastor of a church I was attending in Aberdeen, South Dakota asked me if I would start a contemporary singing group out in Custer State Park.  He was sending 10 high school student singers to a ranch in the Park and would I head them up, rehearse them and take them out to play gigs and spread the love of Jesus.  I was scared to death but, of course, I said yes.  I would even get paid about 20 cents an hour!  It was quite a summer!  We lived in a barn that lacked electricity, used an outhouse and took a cold shower under a hose.  We sang and gave testimonies all over the Park to folks in RVs and churches; we even sang on stage at Mount Rushmore!

After college, I taught elementary and high school music in several schools and started choirs large and small:  swing choirs, standing choirs, good choirs and not so good choirs, some choirs that the audience raved about and some that should not have had an audience.

1980:  I can remember at Green Mountain High School, there were only a handful of students who were not in the choir.  We packed that choir into that tiny room - the site of my notorious faux pax as I shouted (yes, shouted) out over the rehearsal room loaded with HS singers, "Get it up, boys!"  The entire choir howled as I turned red…  I was young - 22, to be exact , and was saved by the dismissal bell.

1992:  I stopped teaching when our second child was born; with 2 kids to wrestle to the sitter in the morning it seemed a good idea to be a stay-at-home-mom, which of course is a good idea if you actually stay at home.  As the kids got into Sunday School, of course, I had to teach the music and then, in 1994, one of the pastors at my church asked me to start a contemporary adult choir.  I didn't want to do it and I was scared to death… but I knew I should and did and am still directing this same choir today at First United Methodist Church here in good old Marshalltown.  On a good day, we fill the 32-seat loft and we still do cantatas, but I don't have to play coronet as there is a fine trumpeter who loves to play and plays well.  Thank You, Lord!

2014:  This past September, I received a phone call that made my stomach do the flip:  I was called by Gail who is the chairman of the Central Iowa Choral Society here in Marshalltown and she asked me if I would conduct the community's Messiah presentation this year.  After saying no, I said yes and I was scared to death.

To say that I've had very little experience with Messiah is not completely true:

1965:   I was about 7 when I was exposed to this great work and incessantly begged for a recording of it for Christmas.  I don't know where or how I first heard it - it must have been my kindergarten teacher (hurray for teachers!) as our black and white TV only got 2 channels and the probability of it showing Handel's Messiah was slim.  I played that recording over and over, conducting my stuffed animals and dressed-up cats (alive) who were set up in soprano, alto, tenor and bass sections in my bedroom.  (They were a rowdy bunch.)  I remember being fascinated with the thought of Handel's obsession when writing it locked up in his tower (is this true??) as I was passionately conducting up in my secluded bedroom.

1978:  In college, I was the accompanist for the choir's presentation of the Messiah.  I was a terrible accompanist but at least I listened and paid attention to the conductor.  I picked up many tips for how to conduct it... but probably not enough...

1980:  While teaching high school music at Green Mountain, I had the choir sing a couple of songs from Messiah as I thought every student should be exposed to this great work.  We made it through the songs in a lively manner.

1998:  We lost a doorbell because of the Hallelujah Chorus.  My mother was babysitting the kids for a long weekend during which a violent thunder storm swept over our house.  A close bolt of lightening must have hit something on the house causing our electronic doorbell to play it's selected tune of the Hallelujah Chorus over and over and over - each time at lightening speed - nonstop.  This of course happened in the middle of the night and my mother grabbed a chair, jumped up on it, reached up and grabbed the doorbell speaker off the wall, leaving a hole but successfully stopping the deafening chorus…  We have since replaced it and a joyful 'hallelujah' still rings out as someone hits our doorbell.

2002:   I entertained friends by sitting on the floor with my back to the piano keys, arms crossed behind my head with my hands on the ivories and played Hallelujah several times… I think alcohol had something to do with it... Those were the good old days - this chickadee will never be that flexible again.

While these said Messiah experiences are vast and unusual, they are hardly preparation to conduct the community's presentation and… I am scared to death.  Ok, maybe I'm not scared 'to death' but I'm definitely nervous, not confident, unsure, unprepared, unequipped, and I'm definitely out of my comfort zone.  The effort needed to learn the music and put this forth to the public is vast and will need countless hours of prep and energy and sleepless nights.  You should see my stack of books and CDs, my notes and study aides… and I've been listening, listening, listening…  I'm not actually sure I can do this….

And that's right where my attitude should be as I start this thing - I CAN'T do it, but with God all things are possible.

This is a good idea!

I do believe I'm called to conduct Messiah 2014.  It's been one big circle:  I started conducting Messiah in front of attentive stuffed animals and alive cats… and now, I'll conduct in front of singers, some attentive and all of them definitely alive.  Philippians 1:6 says:

"I am sure of this, that He who started a good work in you (me) will carry it on to completion until the day of Christ Jesus."

Will you trust that God can lead you?  That He can make the impossible possible?   That doing this impossible something is His plan for you?

Countless folks in the Bible have felt this way.  They accomplished all kinds of stuff in God's strength.

So have you and so have I and so will you and I continue to do so.  There's no way around it.  God calls us to do things that make us rely on Him.  Our response is to go and do stuff for Him - go and sow some seed - even if you are scared to death.

It is not lost on me that I'm asked to conduct this community Messiah choir 40 years after my first invitation to start a choir when I was 16 at Lotts Creek.  This is my 40th year of conducting and this astounding opportunity has been laid into my waving arms.

All I can do is trust.  I can prepare.  I can study.  But the real conducting and the best ideas will be a result of my trusting in God to get this done.  I'm trusting that I'll have the wisdom, strength, discernment and ability - all to God's glory.

Messiah is all about giving God glory.

Handel wrote on his original score, at the very end, after the last "Amen:"

To God be the Glory


I have written it at the end of my Messiah score.

In fact, I suggested the entire chorus write S.D.G. at the end of their scores…  Let us all be of one mind...

To God be the Glory

Posted by Janet Collison at 5:54 PM