So...  I had an interesting experience yesterday...

The Monday Morning Bible Study met yesterday and after much teeheeing and catching up on everyone's news (when some people walk in, they make everyone laugh!), I asked the question I always ask,  "Does anyone have a prayer request?"

On this particular Monday, I could tell by the vacant looks on faces that nothing really pressing came to anyone's mind, except for one friend who I'll call Ann (not her real name.)  Ann finally looked up and quietly said, "I can't find my glasses (eyeglasses)...  I've looked everywhere.  I've looked and looked and re-looked...  They are lost and cannot be found... I don't know what to do!"

We've all been there, flailing about looking for glasses that are right on our heads or worse yet, on our faces!  There is nothing more frustrating than wasting time looking for something that should be a cinch to find.  Ann had her old glasses perched on her nose so we knew she could see as she searched - that was not the problem.

Right away, a couple of us said simultaneously, "We'll go to your house and help you look!!!!"  (We are a full-service Bible Study group.)  This met with another round of teeheeing and a sigh of relief from Ann.  This conversation concluded with a confident prayer for help in finding the lost...

After class, Jan and I (that IS her real name - the same Jan that is taking accordion lessons with me) jumped up and charged over to Ann's house, confident we would find the missing specs.  Ann knew she had last seen them in her closet, so armed with flashlights, we set our sights there.  We looked under the bed... behind the toilet... in the trash... in the armpits of sweaters... I've never looked through someone else's sweater armpits before...

Ann has an organized closet with everything in it's place... all her sweaters and pants and shoes were a delight to look through and really not much of a challenge... no glasses anywhere.

Finally, as a last resort, I pulled a plastic storage box off the top shelf and lo and behold, you guessed it, the glasses were stuck to the bottom.  What a weird spot to find glasses!  The lost was found! 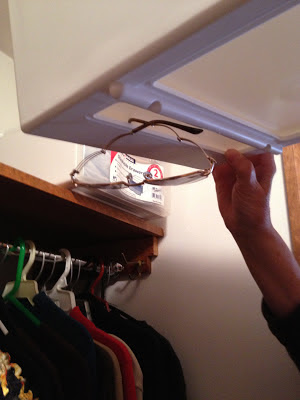 I couldn't help but think of the verse in the Bible that talks about lost sheep.  Jesus is speaking to a crowd and says, 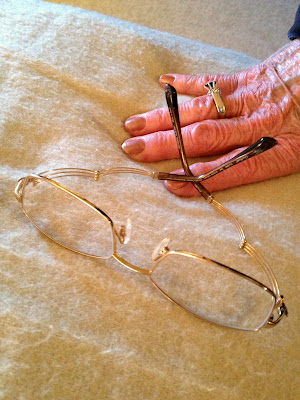 "Suppose one of you has a hundred sheep and loses one of them.  Does he not leave the ninety-nine in the open country and go after the lost sheep until he finds it?  And when he finds it he joyfully puts it on his shoulders and goes home.  Then he calls his friends and neighbors together and says, 'Rejoice with me; I have found my lost sheep.'  I tell you that in the same way there will be more rejoicing in heaven over one sinner who repents than over ninety-nine righteous persons who do not need to repent."  (Luke 15:4-7)

I can't relate to losing a sheep, but I CAN relate to losing something as essential as glasses.  I saw how much Ann wanted to find her glasses and then how much she rejoiced over finding them.  We had a party right there in her closet!  We all whooped and hugged and did little happy dances.

Jesus is not really talking about sheep in His example. He's talking about people.  He really wants each and every person to be 'found' and safe with Him.  He does not want anyone going off and losing their connection to Him.  He does not want anyone to follow something or someone else.  He wants to take care of people.  All people.  He wants to shower people with blessings and love and forgiveness and peace and contentment and abundant life.  He wants everyone in His fold.  That's how He is.

And think of it... Jesus throws a party in heaven whenever someone who was 'lost' turns around and heads back to Him.  He forgives.  He loves.  He blesses... again and again.

Can you imagine the scene in heaven:  Jesus whooping... and hugging ... and giving high fives to all the angels...and doing a happy dance!!!  He delights in you!  Yes, YOU!  He rejoices over you... and me.