So... John and I went to New York City last weekend and I am glad to report, we conquered it. We flew in, we survived the taxi ride to our hotel, we found sustenance, we shopped, we saw some sights, and most importantly, we took in the Broadway show "Annie" not once, but twice! Times Square was more brilliant than the last time we were there; we were in slack-jaw mode most of the time.

"Annie" was fabulous - as fabulous as we hoped it would be. Twenty five years ago, I directed "Annie" as a local community theater production and this coming summer, I'll be directing it again. I have surrounded myself with people who really know what they are doing, but I wanted to spy on how the new version of "Annie" was being done on Broadway - hence the trip.  I took copious notes on napkins during the show.  If I could have taken pictures, I would have. 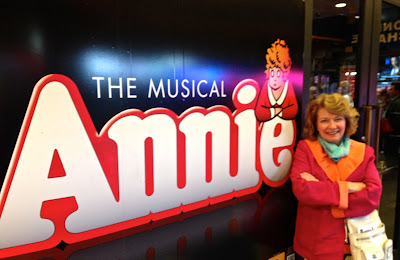 The other Broadway musical we saw was "Spiderman."  That show was over-the-top in its creativity. Spiderman flew all over the theater, in fact, there were 8 Spidermen flying and swooping about.  At one point, the bad guy and Spiderman had an air-borne fist fight just left of the chandelier! Amazing!

Perhaps our Annie should swoop in on a zip line during the second act? What do you think?


You might find it hard to believe... but there are some significant differences between NYC and my home town of 27,000:

1.  Everyone in the city had on black, except one person - me. I wore my neon bright pink and orange raincoat, bright blue jeans and sassy turquoise tennies and felt totally out of place. The stores are full of color, but I think it will be a hard sell as the New Yorkers seem to prefer their black, head to toe. 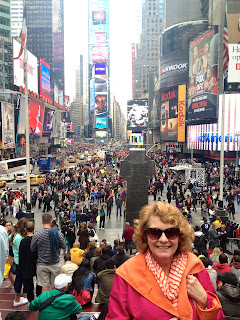 2.  Hotdogs are expensive.  I've fed the entire youth group on what I spent on a couple of dogs John and I slammed down while standing in the loo line at the theater.

3.  In this huge city, there is no personal space.  In my town, I could walk all day long and not touch a single soul.  In NYC, we squeezed through people to cross the streets and the subway was so crowded, it was full-body contact the entire time. It was interesting; there was plenty of full-body contact but absolutely no eye contact.

Differences aside, people are about the same no matter where they are located. We all carry some degree of fear. I know I felt a twinge of fear being in the big city. It felt kinda dangerous though nothing remotely dangerous happened to us. But I couldn't help but think.... All these people... what if...

Our visit to the 9/11 Memorial was a reminder that horrendous stuff happens.  We were so touched by an elderly man silently crying as he found the name of a loved one on the rim of the waterfall... I can't even imagine the chaos and terror that swept through the city as the towers fell. 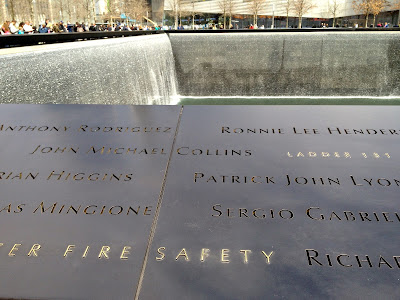 And the senseless bombing in Boston hangs on our minds and promotes fear in our hearts as we wonder... what is going on? Are we ever safe?

The list is long of horrible tragedies and mind-boggling violence happening all over the world.

Even in my quiet little town, are we safe? Stuff happens. Tornadoes. Blizzards. Floods. And yes, even violence. Even here in small town Iowa, there is fear.

In the gospels, we read of a time when the disciples were afraid. Jesus wanted to travel by boat to the other side of the lake.  As they set out, a wild storm came up nearly swamping the boat. Jesus was asleep, probably totally exhausted from feeding thousands of people, healing the sick and training the bungling disciples. They woke Him and asked if He cared if they drowned. Jesus got up and spoke to the wind and the waves and immediately, all went calm.  He then asked His disciples, "Why are you so afraid?  Do you still have no faith?" (Mark 4:40)

In John 14:27, Jesus has some pretty strong words to say about being afraid:  "Peace I leave with you; my peace I give you.  I do not give to you as the world gives.  Do not let your hearts be troubled and do not be afraid."

There is a place of peace with Jesus.  He offers a place of rest.  He relieves us from the burden of fear. His very loving Presence is like healing balm to a fear-filled heart. 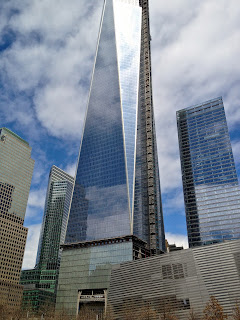 He will do the comforting... our job is to trust.


He will release peace into our hearts.... our job is to trust.